I picked up a bunch of comics at the library the other day, and read through a bunch of them yesterday. 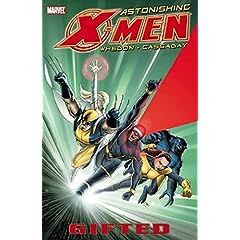 I used to really like the X-Men (Claremont era, the Evolution cartoon, etc.), and have been on a Whedon kick lately (watching Angel repeats), so this caught my interest.

This came out around the time I swore off the X-series for various reasons, and I'm starting to remember why: There's only so much one can do with a 30 year old franchise, when "protect the cash cow" is more important than "tell good stories".

And what's with the White Queen's outfits? Holy carp, I'm no prude, but this just doesn't make any kind of sense. Having another character joke about it doesn't make it any less stupid.

The main plot is also an amazing display of 5-year-old-logic: Alien bad-guys appear and tell us that their ESP tells them that a mutant will wipe them out, to prevent such a genocide, they're going to kill us, except first, we'll try to "cure" the mutants, instead. All of this is told in flashbacks, outside of our protagonist's direct impact, so there's no one around to ask, "Um, wtf?"

There's a half-hearted attempt to combine character-driven and morality-play story-telling (would you take the "cure" if it meant you couldn't fly?) but it - of course - just devolves into fisticuffs. 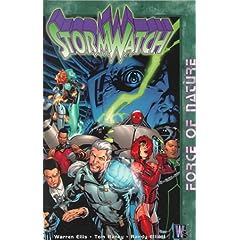 Short history: Stormwatch started in the late 80s/early 90s as a X-Men/Justice League rip-off. Later, it spawns The Authoriy - a book I'd always wanted to read, but was unsure where to start. Apparently, Force of Nature is where Authority writer and comics-writing-celebrity Warren Ellis takes over and mildly reboots the story, so it seemed like a good place to start.

The stated goals of the series (a take no prisoners super-team, reshaping the world pro-actively, instead of re-actively) don't get any traction in the book proper (prisoners are taken, very little pro- and a lot of re-), but there's still a spark here. More death than your average comic book, for one thing. If there were an analogy test for pop-media, Stormwatch is to the Justice League what The Shield is to Law & Order.

This is, ostensibly, a book one reads for the writing, not the art. Which is fine, the art's kinda "eh". But, the writing, while not exactly Watchmen, is interesting. Stormwatch upgrades quite a few of the genre tropes, refining the story down to the most essential elements. For example, the heroes teleport to the site, by-passing any "travelogue moments" and generating a "situation already in progress" vibe (see Farscape, Doctor Who, etc.)

Also, the Weatherman (Stormwatch's version of Prof. Xavier) does a bit more directing than I see similar characters doing in other books (especially Prof. X). Sure, some of this is just shield's up dialogue, but it's also much-needed "base rounding" to shore up the concept that these are quasi-government, quasi-military agents.

Force of Nature fails to get any sort of "big picture" ball rolling, as far as I can tell. Individual chapters are thankfully well-contained stories, but there's precious little meta-plot building in the background. Still, the book succeeds in establishing... something. A mood, a direction, a distinction in its field, maybe? This is a success mostly by context and genre - if you're a fan of Justice League, Fantastic Four, or X-Men super-team-type stories (moreso than any particular character, per se), you'll probably enjoy this.

Does "Force of Nature" start out with Bendix firing people and generally doing a re-org?
Yup, that's it.

I couldn't find any indication that the issues pre-Ellis had been collected. I'm not sure I'm all that interested in reading the preceding issues, at the moment.

Anyway, hold on to it for now; the Toronto library seems to have all of the TPBs.

From what you remember, does SW get good at any point? I just started reading the first Authority collection, and it's already a big improvement.