Today is Canada Day, the Canadian answer to the 4th of July in the US. (I still occasionally get friends or relatives in the states asking me if they have the 4th of July in Canada. Yes? No? Not exactly? Still not sure how to answer that one...)

We saw Sicko Friday night (nice movie, the Cuba part had me choked up for vaguely inexplicable reasons) and I've been thinking about things it said and left unsaid all weekend.

For example, I believe there was an intentional-if-understated juxtaposition between the testimony of Dr. Linda Peeno (that Humana provided financial incentives for doctors to deny claims) and the interview with the unnamed British doctor who describes the financial incentives for providing preventive medicine, such as getting his patients to quit smoking.

Something that struck me after seeing the movie: American politics spends a lot of energy on idealogy and/or mythology. It'd be interesting to do a word-count: how many times American candidates mention "freedom" or "liberty" or "terror", compared to words like "budget" or "allocation" or "distribution".

Meanwhile, across the border...

I've seen one parliamentary election each in Germany and Canada, and in both cases, I was struck by how down to earth and reasonable both were, compared to the many elections I've seen in the US (not to mention being conducted more quickly & efficiently, too.)

As I recall it, one of the TV commercials in the recent Canadian election featured a candidate, seated at a conference table, answering a few questions as they were put to him by a modestly dressed woman. That's it; that's the whole ad.

As an aside — check out this flyer I scanned: 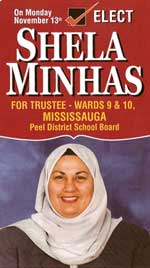 Shela Minhas didn't win, but she came pretty close. Are there cities in America where a Muslim woman wearing a veil has a chance at coming in fourth of ten candidates? Heck, there are places where a white protestant woman won't get that.

There's a scene in Sicko that involves housewives across America sitting at a coffee klatsch listening as a recording describes the slippery slope whereby socialized medicine would lead to rampant Communism.

The arguments being made on the recording are entirely rhetorical — no facts, no details, no numbers — and they could easily be investigated by anyone willing to expend the long-distance charges to call someone in a country with socialized medicine and put some practical reality where their mouth was.

And here Moore is, doing exactly that, some 30 years later. Why on earth did it take 30 years to produce an American willing to drive to Canada and ask a Canadian doctor if he was suffering under socialized medicine? (Well, it didn't, technically — I suppose it took 30 years for an American to do it on video.)

Now, we're in the wind-up for the 2008 presidential election in the US, and both sides are engaging in this empty political rhetoric again. "Pull out" vs. "Stay the course"; "Medical care for all" vs. "Taxes"... the major American "issues" are empty strawmen masquerading as politics.

It'd be like asking a teenager what was one should do when driving a car, and being answered "Freedom! Liberty! Move fast!" But an overwhelming majority of Americans expect and endorse exactly this impractical approach.

While I think the Republicans are doing a particularly deplorable job of this ("freedom fries", "terror alert level", "stay the course", "flip-flopper", the list goes on...) the Democrats aren't really any better: still fighting amonst themselves over who "voted for the war" — as if that meant anything. "For or against" is an interesting place to start a debate, it really shouldn't be the final word.

Listening to the political discourse in the US, I'm reminded of this great episode of Star Trek: The Next Generation where the aliens speak entirely in metaphor, producing a language untranslatable even by the ship's miracle translator gizmo, except that the dialogue has become incomprehensible to ourselves.