So… Leopard came out on Friday. We stood in line for an hour or so at Utrecht’s A Mac. The “big unveiling” included T-shirts and champagne — plus we got Leopard 6 hours ahead of anyone in the States!

I spent much of the weekend installing and tweaking Leopard. I was eagerly awaiting Spaces, and it works better than anticipated. I’m looking forward to making use of Time Machine, too.

But I’ve been plagued by inconsistencies in Leopard – most of them aren’t really Leopard’s fault (in fact, I’d say we’ve just been having “one of those weeks” – we’ve been “plagued” by leaky pipes, broken washing machines and bank errors for the past few days), but it’s been the whipping boy.

For example, I tried setting up Boot Camp, and got caught in ‘boot camp hell’ for a few hours (Windows wouldn’t install, and I couldn’t figure out how to get back to OS X – I had to borrow Liz’s machine to find a solution online). There were similar problems re-installing Photoshop CS3, something where it kept asking for a non-existent disc 2. Both of these issues were resolved eventually, but it was a rough first impression.

Compared to the bright plasticy blue of Tiger (and, to some extent, Panther), Leopard has a de-saturated feel. From the dark, recessed Apple logo & spotlight icons, to the longer shadows and newly darker title bars, to the uniformly pale folder icons, it feels like my Mac’s going through a “goth phase”.

Also, Friday was Eric’s Halloween Party at Café Jan de Winter’s catacomb. Costumes were strongly encouraged, so we had to come up with something… I picked a Privateer Press pirate bandana at GenCon and went to the party as a software pirate. Liz got a blond wig and wooden cross at a local party store and went as Buffy the Vampire Slayer. 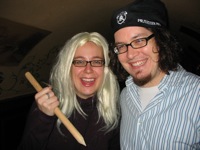 And, as if that weren’t enough, this weekend is the end of daylight savings time in Europe, a week ahead of the North Americans.

Which brings up an interesting story… One of my projects lately is a reservations system, with a “staff” interface that shows all the reservations on a given day. I got a call earlier this week that the system wouldn’t go past October 28. The basic code looked something like:

And advancing to the next day:

The problem was that 1.days is the same as 24.hours. But the last day of Daylight Savings Time (October 28 in this timezone) has 25 hours!

My solution was to fill in a value for “hours” that wouldn’t be affected by an extra hour here or there:

Do the T-shirts have the strangely unreal reflection properties of the retail box? That has to be the coolest thing I've ever seen on cardboard. I keep staring at it for minutes... it must be the portable version of the Reality Distortion Field™. We're all in trouble now...

But mockery aside, I'm guilty too. It took me two years to work out all of the DST bugs in a time tracking application at my former employer (two spring shifts and two falls shifts in 2002 and 2003).

@Matt: No, the shirts don't have the foily effect. But yes, the boxes are hard to resist.

@Chris: You raise an interesting point, actually, but the fault is mine (and, to some extent, Rails'), not Ruby's.